"THE VICTORS" by Matt Hall
Early December, 1942: a year after Pearl Harbor, U.S. Marine survivors of Guadalcanal swap hard-won war trophies after five brutal months of fighting. These teenagers-turned-veterans had endured savage bombardment by air and sea. They had weathered disease and near starvation. Ultimately, they had gone eyeball to eyeball with a seasoned foe and bested them in combat, giving America her first major land victory of WWII. Now, as the 5th Marine Regiment departs, the Marines of the 1st Regiment await their chance to say goodbye to Guadalcanal. They would leave as victors, the Marines who gave a shaken nation new hope.

Depicted in the scene are Robert Leckie (writing on the far left) and Sid Phillips (seated with Japanese flag). A limited-number of prints are still available autographed by Sid Phillips and his fellow Marines - click here to shop now. 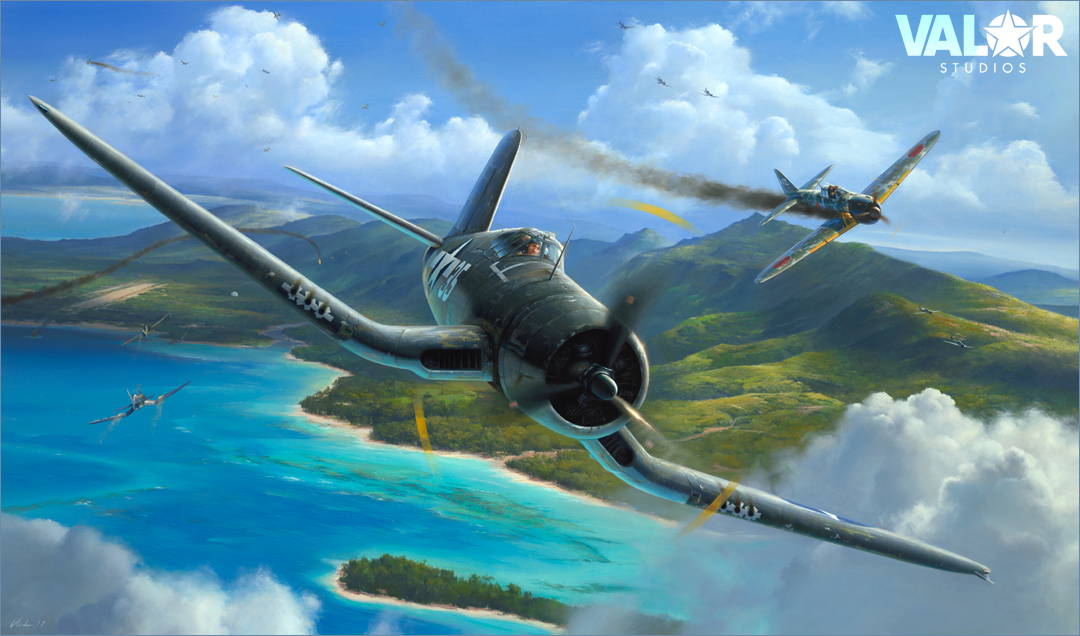 "COME UP AND FIGHT" by Gareth Hector

Bougainville Island, October 18, 1943: The fight was days in the making. When Pappy Boyington flew over the airfield at Kahili earlier that week, a Japanese-accented voice radioed: “Major Boyington, what is your position?”

“Right over your damn airport,” he replied, “Come up and fight!” But no enemy answered.

This day was different. With his Black Sheep in tow, Pappy issued the challenge again: “Come on up and fight, you yellow bastards!” And this time, the Japanese sent their answer, launching some fifteen aircraft. The ensuing air battle would end with the Japanese fleeing, the Black Sheep victorious, and a new page written in the legend of Pappy Boyington. 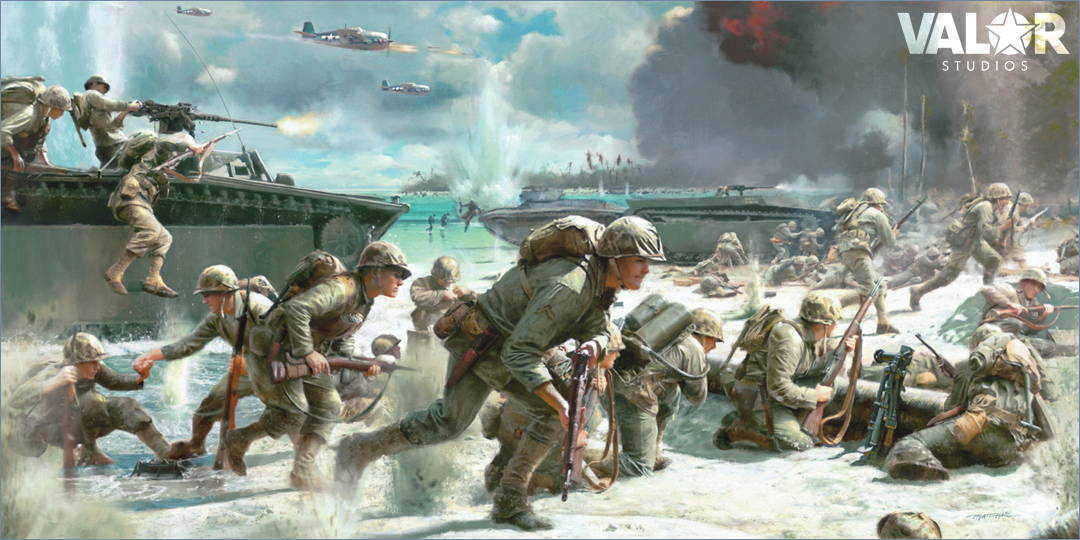 "OFF THE BEACH!" by Matt Hall

It is 8:30 a.m. on September 15, 1944 as the Marines of King Company churn onto Peleliu. Vehicle exhaust, gun smoke, and burning vegetation choke the air as Japanese artillery and mortars pound the pre-sighted beaches. Machine gun bullets rip across the sand as Eugene Sledge, in his baptism of fire, trails veteran R.V. Burgin (at center).

Sent to capture Peleliu’s airfield from an enemy of unknown strength, the men of K-3-5 and their brothers of the 1st Marine Division know they are in the fight of their lives. But, for now, only one thought echoes through their minds: Get off the beach! 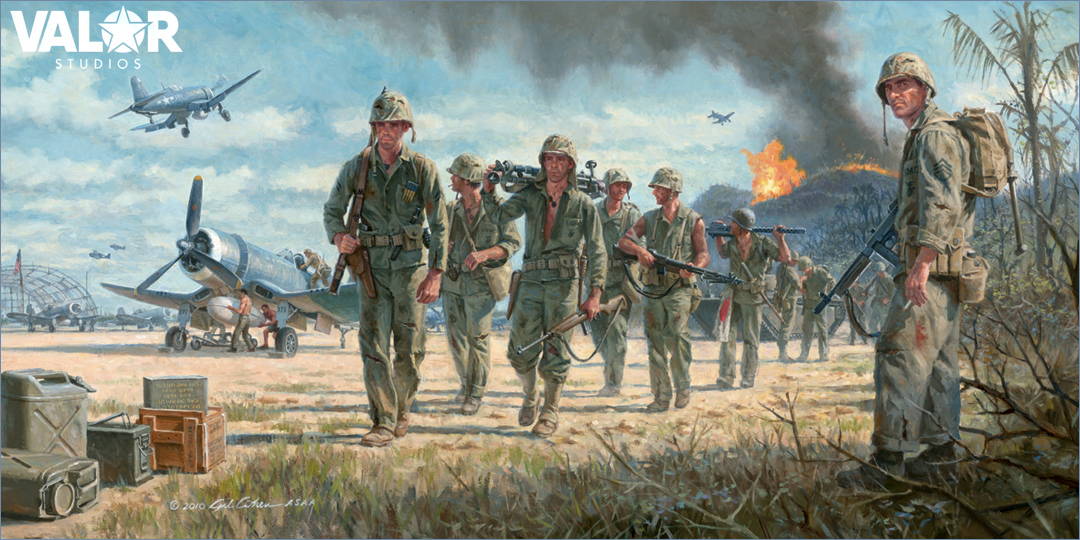 "OFF THE LINE" by Gil Cohen

It is September 25, 1944 as the Marines of King Company, K-3-5, file past the Peleliu airfield. Ten days after landing on the island’s bloody beaches, they enjoy a brief respite from the fighting and the heat. In the days prior, they helped capture this very landing strip, the campaign’s main objective.

But, in the distant Umurbrogol Hills, the battle has entered a terrifying new dimension. There, in the island’s “dreadful ridges” as Eugene Sledge called them, savage, cave-to-cave combat ensues. Soon, the men of K-3-5 will fight there, but not before enjoying this moment off the line. 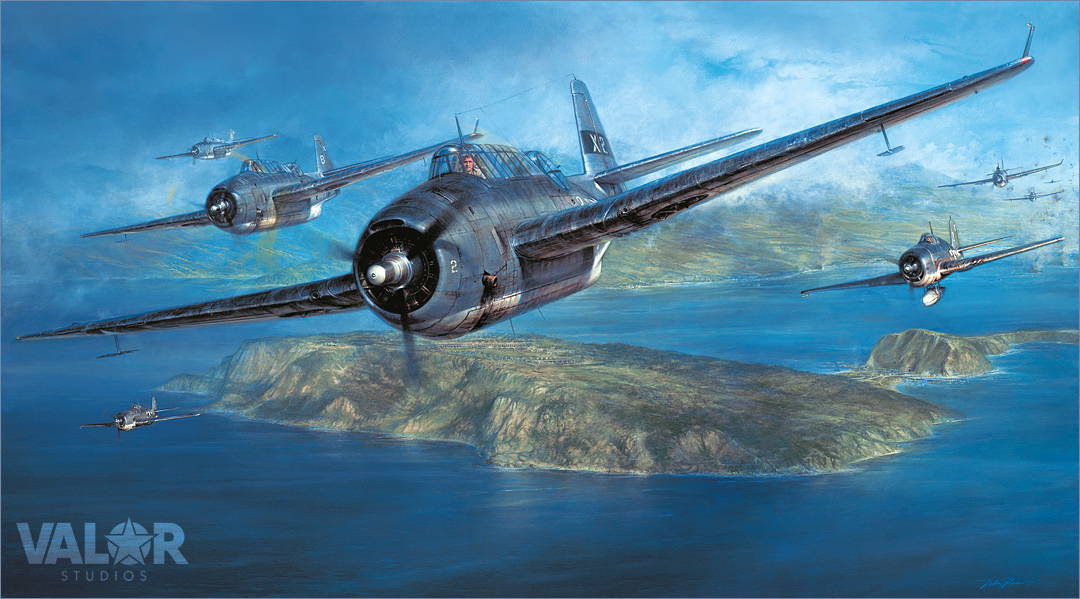 "AVENGERS OF THE PHILIPPINES" by John D. Shaw

November 14, 1944 . . . As smoldering enemy ships mark a trail to Manila Bay, Avengers and Hellcats of Air Group 51 overfly the isle of Corregidor on their return to the carrier U.S.S. San Jacinto. With the misty mountains of Bataan standing as a silent sentinel, Naval LT (JG) George H.W. Bush pilots his TBM in one of his last combat missions of WWII. The valor of Bush’s group in the Battle of Leyte Gulf and in the strikes on Manila Bay helped pave the way for MacArthur’s campaign to liberate the Philippines.

A limited-number of prints are still available signed by pilots who flew with Lt. Bush - click here to shop now. 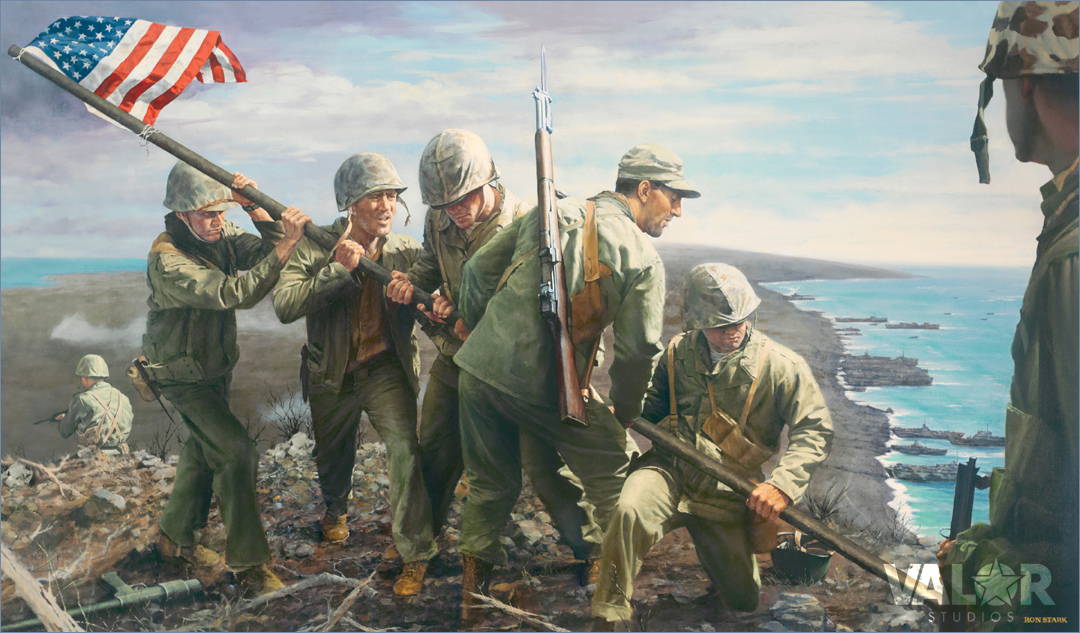 February 23, 1945 . . . Atop volcanic Mt. Suribachi, Marines of the 3rd Platoon, Easy Company, 28th Regiment, 5th Marine Division, hoist the first American flag over Iwo Jima. As Old Glory breaks the skyline, a tremendous roar of shouts and whistles will emerge from the Marines on the beaches and the sailors at sea. Later, this flag will be lowered and a replacement raised. Although a photo of the second flag would be cherished by the home front, the first flag belonged to the heroes of Iwo Jima.

A limited-number of prints are still available - click here to shop now. 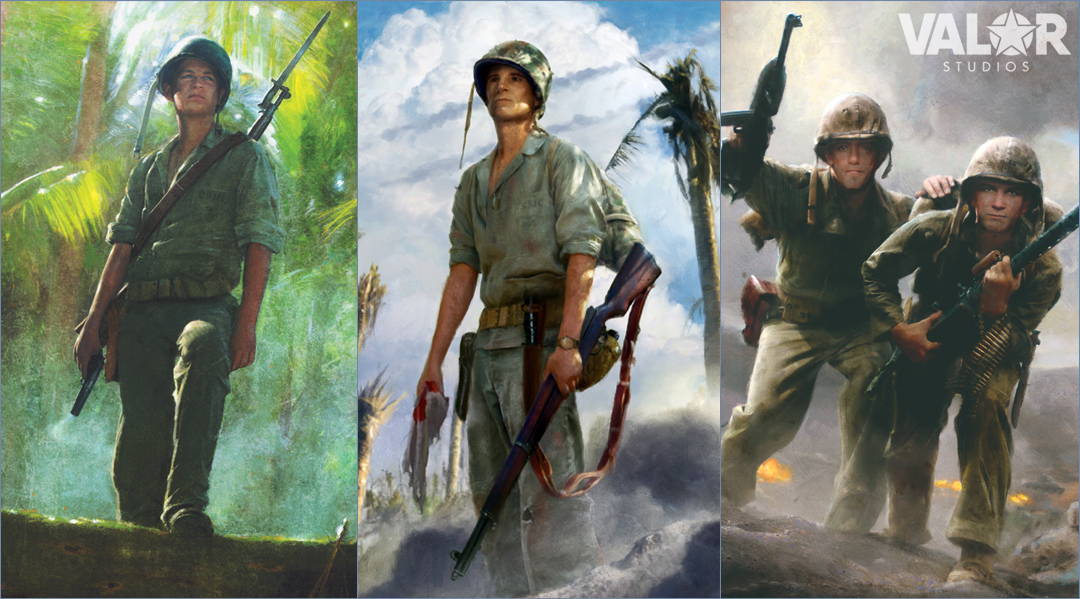 Portraits of Valor by Matt Hall 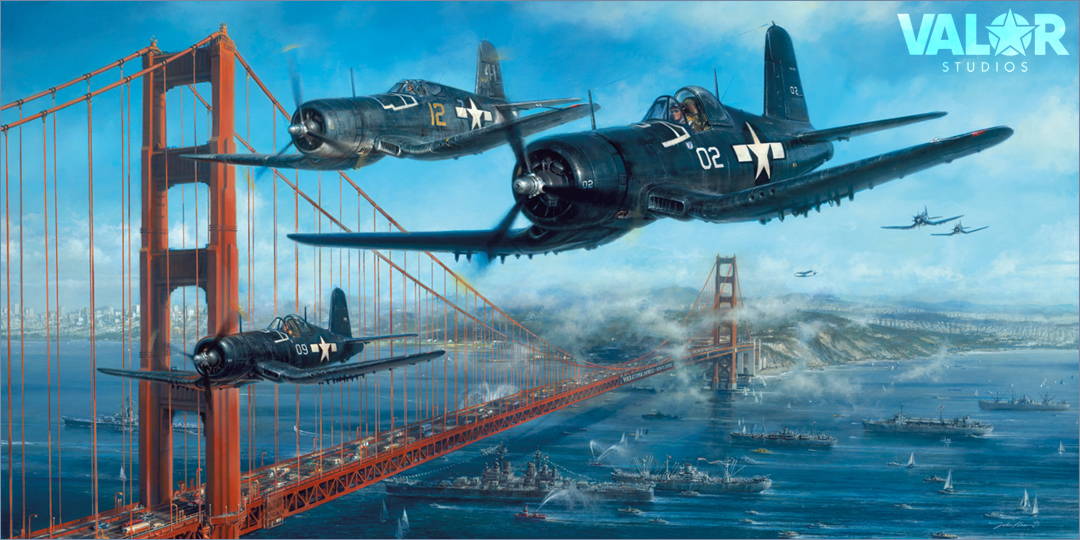 "THE HOMECOMING" by John D. Shaw

September 1945: For countless American boys who sailed off to war in the Pacific, the Golden Gate Bridge was their last sight of home. Many would never return. Now, the veterans of WWII witness the joy of the nation they saved. A parade of watercraft escorts their convoy into San Francisco Bay while Corsairs of the "Black Sheep" provide an aerial salute. Stationed in California, the Black Sheep planes are factory fresh except for a war-weary model, used for training. Like the heroes below, this tired fighter will soon retire, its mission accomplished. America is free. No homecoming would be sweeter than this.

A limited-number of prints are still available signed by the heroes from Voices of the Pacific - click here to shop now.